Several weeks ago, Janet noticed that our washing machine was acting a little erratic and Pat, our friend, replaced the main timer in the hopes that the problem would be resolved. Now, the washer is about 10 years old and I remember when washers lasted twenty years or more. But, I guess that isn’t the case any more. Because, even though the machine has worked fine for the past several weeks, yesterday it died – for good this time. It just wouldn’t pump the water of the tub, and after a $200 expenditure several weeks ago, we just decided to call it a day. We went shopping for a replacement yesterday afternoon.

For almost thirty years, we have purchased our appliances from H.H. Gregg, a local appliance store that is run by Christians and has a great track record of assisting the local church. I remember the first time that I shopped there, in September, 1982 – the week-end that I moved to Carmel. Janet was still in the Chicago area, and I purchased a home here without her. Now don’t worry – she trusted me; and she loved the house we moved into. But we needed appliances and that’s how I got hooked up with Gregg’s. And we’ve been shopping there ever since – TV’s, microwaves, dishwashers, all sorts of electronics and, of course, the laundry room necessities. We’ve been here 29 years and I should be an expert by now when it comes to buying new stuff. But no such luck….

In case you haven’t been in the market for washers and dryers the last year or two, there are many new innovations. To begin with, Janet really fell in love with the glass top on the washer and the glass front door on the dryer. Now I can’t figure out what’s so cool about watching your clothes get washed and dried, but apparently she really likes it. And there are all sorts of buttons, cycles, high efficiency gizmos and some basic things that have changed from the past. For example, the dryer vent now needs to be metal, instead of the plastic that we have used for years. And if you use the rubber hoses that come with the washer, they’re only guaranteed three years, and who is going to remember to change them to keep the warranty up? So, for $20, you get the lifetime guaranteed ones. Oh, I forgot, the warranty is only for one year, unless you spend another $389 to get the 4 year extension. Can you tell that I am tired of all this? I didn’t do the extra warranty….. 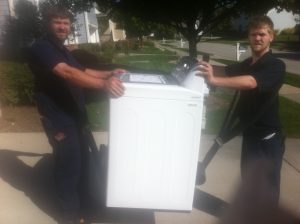 New Washer being Delivered - with Straps and Harnesses

Anyway, they were able to deliver these new units to us this morning – at 10:45. Janet was out, but I stayed home to work on several projects and wait for the delivery people. And they were really good – except for the call at 6:45 this morning, letting me know that they would be here between 9 and noon. They were right on schedule – great news. Shane, the driver, and his assistant arrived and promptly removed the old appliances. I was waiting for the traditional appliance dolly, but instead they used straps and harnesses.

I thought I have seen it all, but they said this was a much easier way to work. And, by golly, they were right. They were zooming around corners and navigating tight spaces; working in unison like a team of yoked oxen. It was a thing of beauty…….

Of course, after removing the old stuff, and before they brought in the new units, I had ample time to get on my hands and knees to clean the floor – for the first time in 10 years. I don’t need to go into detail – I’m sure that you get the picture. When it was all said and done, and the mess was gone, there they stood – bright white and stainless steel.

The installation people tried everything out and left the dryer running. Twenty minutes later, I heard music coming from the laundry room. What? Yep, the dryer plays music when its done – who knows; maybe the washer does also. Anyway, I haven’t been able to get Janet out of the laundry room. We’ve never washed so many clothes in one day in the 38 years we have been married. In fact, I think she’s washing our clean stuff just so she can try out all the cycles. I’m thinking about moving the bed into the laundry room tonight so she doesn’t miss any of the songs.

So, my first thought tonight was to use the famous verse about being yoked. But after thinking about it a moment or two, I decided to highlight one of the miracles of the Bible; when Jesus was transfigured on the mount. The story is told in Mark 9:2-4, “Six days later, Jesus took with Him Peter and James and John, and brought them up on a high mountain by themselves. And He was transfigured before them; and His garments became radiant and exceedingly white, as no launderer on earth can whiten them. Elijah appeared to them along with Moses; and they were talking with Jesus.” In this story, the three apostles comprising the inner sanctum of Christ’s circle of disciples witnessed a great miracle – the meeting of Jesus, Elijah and Moses. And we are told that Christ’s clothes became radiantly white!

My encouragement tonight is that Christ wants us to be clean – inside and out. And what’s important to God is how we approach Him in a spirit of worship. Because it is necessary that we prepare our hearts in such a way that we can approach the foot of the cross and be made clean by the atoning sacrifice of Jesus Christ. My prayer is that you will always strive to be pure and clean; and you won’t need a new washer to do that. Because Christ did that for us – once and for all.

By the way, although we have used Whirlpool appliances in the past, this time we changed. We decided to try LG – that’s right; Life’s Good……….. Praise the Lord…..

I am not naturally a technology guy. Back in the 1980’s I took the position that if I didn’t worry about technology, it would somehow go away and I would never have to worry about it again. But that was…
Dr. Scott Toussaint 0
Devotional
January 26, 2023

It was on this day in 1998 that Ted Kaczynski, dubbed the Unabomber, pleaded guilty to the federal charges against him, ending more than 17 years of bombings attributed to him. Having attended Harvard at the young age of 16…
Dr. Scott Toussaint 0