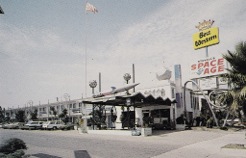 Last week, the news channels were alive with footage of the opening of Disneyworld, in Orlando, 40 years ago. Many people I know make an annual pilgrimage to this mecca of entertainment and fantasy, but frankly, I am more of a Disneyland fan myself. After all, I grew up watching the Wonderful World of Disney on Sunday evenings while we were waiting to have dinner at my grandparent’s home – long before Disneyworld came into existence. There, in the background, was the castle of the Magic Kingdom and I remember so vividly heading out to California on a family vacation in the mid 1960’s and my parents decided to let us go to Disneyworld. I was stoked….

We actually stayed at a place named the Space Age Lodge and it was full of rockets and strange stair railings. It was a real ’60’s sort of place, and I am sure that it was all Dad and Mom could afford. It was right next to Disneyland and we took a shuttle to the Park each day. I kind of look back on it now with fond memories, but I went out on the internet this evening to look it up and it really did look kind of cheesy – but what can I say? I was a little kid in love with the idea of Walt Disney’s Magic Kingdom. I know that my parents really struggled to pay for us to enter the park, but I remember that we had two-day passes. And if memory serves me correctly, I think it was something like $40 for all of us to spend our time there. We rode the train, walked Main Street, entered Frontierland and all the other different parks, but far and away, I loved Tomorrowland. I even remember that Monsanto had a huge exhibit there.

Throughout our stay, among other things, we went in the submarine, took a jungle cruise, visited the Tiki Hut, and park employees were in the process of working on the Matterhorn – but it wasn’t built yet – so we weren’t able to ride that attraction.

Anyway, the next time I entered a Disney park was Disneyworld in Orlando. It was 1977 and Janet was pregnant with Jill – Kristin was two years old. We traveled up from Ft. Lauderdale to see the attractions and I distinctly remember that Kristin was enthralled with the Matterhorn attraction there. Janet was in no condition to go on the ride with us, so Kristin and I headed into the long line; waiting for more than 90 minutes to get on the ride. Mind you, there was one of those signs at the entrance indicating that you had to be a certain height to enter the ride, but the ticket person was kind and said that Kristin could go in as long as I held her tight. No problem….

Kristin climbed in our car ahead of me and I sat behind her, holding her tight and strapping us both in. After all, we had heard reports that it was quite a good ride and we wanted to be sure that we were secured good and tight. And then it was time – the man released the brake and we started the ride. Then suddenly, loud alarms were going off everywhere, sounding like loud buzzers. The car jerked to a stop and all the lights in the whole building came on. And the magic was gone…..

Apparently, there was an electrical problem of some kind and the entire Matterhorn shut down. We could see all the tracks throughout the entire mountain and people were stranded in their individual cars all over the place. People who were at the top of the ride were screaming and employees were coming from everywhere trying to calm everyone down. Thankfully, literally, Kristin and I had moved no more than 5 feet and we were still able to get out of our car on the platform where we had just entered. Thank God.

If we had been stuck on the top of the mountain, I would have been screaming like a little girl…… Kristin seemed to be unfazed. The gentleman in charge of the ride told us that something had tripped the sensors and the ride would have to reset. That would take 45 minutes to an hour. Mind you, we had already been there more than 1-1/2 hours while Janet sat on a bench waiting for us. She must have thought that forgot about her.

To cut to the chase, enough was enough. We got off the ride, and believe it or not, I have never been back to Disneyworld – since 1977. Now Janet and I did take the family to Disneyland in Anaheim, CA when Jill was getting ready to start college in about 1995 – and we had a great time together. It brought back so many HAPPY childhood memories for me. No – we didn’t stay at the Space Age Lodge, but we loved it anyway. In fact, we stayed at the Beverly Hills Hilton ….. and had a wonderful trip together.

Somehow, since that fateful Matterhorn event so many years ago, I have lost my desire for Disneyworld. Maybe some day we will try again, but it doesn’t hold any special place in my heart the way the California park does. So given my choice – Disneyland over Disneyworld – every time.

But the whole thing in Orlando did give me a perspective on patience. It’s now been more than 35 years since I last tried to ride the Matterhorn; and I still hate long lines. I can’t think of anything worth waiting in line for. So perhaps a verse for Proverbs is in order tonight. So how about Prov. 19:11, “A man’s wisdom gives him patience; it is to his glory to overlook an offense.” Based on this Scripture, maybe I owe Disneyworld another chance.

In the meantime, my encouragement is to let you know that God does desire for us to focus on the important stuff and to realize that everything good happens in His timing. We have no power to speed things up, and when we wait on God, we are usually rewarded. Of course, we shouldn’t sweat the small stuff – or hold grudges for almost 35 years. My prayer is that we all need a little more patience and I hope that you will join me in asking God to increase our wisdom. And when things don’t go our way, perhaps we can chill out a little and just go with the flow…. Have a great day in the Lord!