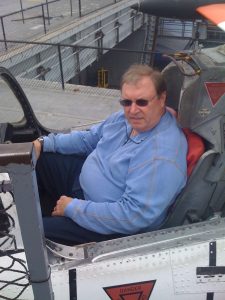 Last Thursday, Janet and I left our hotel and headed down the harbor walk to see the USS Midway, an aircraft carrier that is now a floating museum moored in San Diego. We had heard some great things about the ship, but we had an even better time than we could have imagined.

First of all, I have never been on an aircraft carrier and it was huge! We paid for our tickets and walked up the ramp to the flight deck, where the planes were stored between missions. People who had gone before us recommended that we first head up to the bridge and the flight control areas, located at the top of the ship. We were in a group of approximately 20 people who travelled together up the interior ladders of the ship, several stories up to the top of the Midway. There we saw what it was like to witness the take-offs and landings on the carrier.

Next we went to the navigation station, where the ship’s charts and supporting equipment were housed. It was also awesome. Finally, we headed to the bridge, the command center of the ship, and I was chosen to “play” helmsman and “steer” the ship. We were taught about how the different areas of the ship, in communication with the engine room, all worked together to plan and execute successful missions around the world for many years.

Once we were were back on deck, we were told about two lectures that were happening throughout the morning. They were being given by former servicemen who were teaching on how take-offs and landings were done on carriers. We headed forward first, and listened to a great talk by a kindly older gentleman about the protocols for taking off from the ship. Statistics about the catapult system to launch the jets, and many other fascinating pieces of information were passed to us. For example, there is an officer who is responsible for making sure that launches only happen when the bow of the ship is pointed up, so the planes don’t take-off and land in the ocean. I never thought of that!

But that’s nothing compared to what we learned when we listened to the lecture about jet landings on carriers. The talk must have been an hour and it was one of the best lectures I have ever heard – anywhere – on any topic. I was completely awed by the orchestration of all the various crews necessary to successfully land one of these fighter jets. And to think that the cycle repeats every 35 seconds until a squadron of approximately 20 planes lands on deck.

We learned about the three trip lines across the deck that the tail hook tries to snag, the lighting system for go/no-go landing decisions, the grading of each pilot on each landing and the fact that a plane goes from 150 knots per hour to a dead stop in 2.5 seconds. Remarkable.

But the most interesting thing I learned is that the correct way to land on these carriers is counter-intuitive to the pilots. When we normally land at airports, we are all familiar with the procedure the pilots follow at touch-down. The thrust is reduced, the engines are reversed and the plane slows to a stop. But that’s not what happens on carriers. When these jets drop out of the sky, at a rate of 15 feet per second toward the deck after they cross the fantail, the pilots are really in a controlled “crash.”

As soon as the plane touches down, rather than reducing thrust, the pilots are taught to push the engines to the limit – full throttle – in case they didn’t snag one of the lines necessary to stop the jet before it falls off the bow of the ship. In other words, once on the deck, the idea is to be prepared to take off again.

After thinking about this for a few minutes, I couldn’t help but make the comparison to our spiritual lives. Many of us go through life excited when we first encounter the living God. Then, once we make “contact,” we tend to throttle back and coast along for most of our lives. But I don’t think that is what we are supposed to do. We are to live our spiritual lives at full throttle – going strong for the Lord all the time.

The verse for tonight is from Revelation 3:15-16, “I know your deeds, that you are neither cold nor hot. I wish you were either one or the other! So, because you are lukewarm—neither hot nor cold—I am about to spit you out of my mouth.” In this verse, about one of the seven churches mentioned in the beginning of Revelation, we are told that the church is not pleasing to God because it doesn’t really stand for anything – it’s coasting…. And that is not acceptable to God – he wants us on fire for Him.

My encouragement tonight is that God wants us to live life to the fullest – for Him. And life with God can be far more fulfilling that we can ever imagine on our own. My prayer is that God will show you how to live life at full throttle – and how you will reap the eternal rewards of that decision. Have a great day in the Lord.

It was on this day in 1998 that Ted Kaczynski, dubbed the Unabomber, pleaded guilty to the federal charges against him, ending more than 17 years of bombings attributed to him. Having attended Harvard at the young age of 16…
Dr. Scott Toussaint 0
Devotional
January 19, 2023

I'm kind of particular about my Bibles. In fact, I have an entire bookcase of them. They include a small New Testament that my grandmother gave me on my 10th birthday, the Bibles that Janet and I received when we…
Dr. Scott Toussaint 0