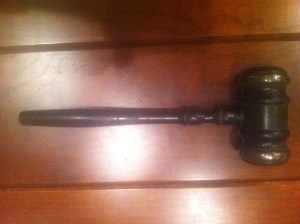 Our Thursday night Bible study is in the process of working through 1 Samuel, which is the story of the transition from the judges of old to the kings of Israel. And one of the things that makes the book so special is that the people didn’t realize that God never intended for them to have a king, other than Himself. In fact, God ordained that judges would rule over the nation, but this was not acceptable to the Jewish people, as they wanted to be like every other nation around them – ruled by kings.

Each week, the study has reminded me of my early childhood and the time that I spent with my grandfather sitting next to him in his courtroom; hearing cases and deciding the way that they would be resolved. But his career went back far further than my childhood. In fact, Grandpa watched his own mother die when he was about 13 years old, and that event forever changed him. He eventually put himself through Northwestern Law School and ended up in the District Attorney’s Office in Chicago at the height of the mob activity in the 20’s and 30’s. He prosecuted many of the cases that involved famous people, and my mother recalled how she learned to drive the family limousines when she was 13. No, Grandpa wasn’t pretentious, but he was practical. Limos were heavy, and tough to run off the road. If he was shot at or wounded, he wanted Mom to be able to drive and get away from the danger in case he was unable to carry on. Quite a way for Mom to grow up.

Of course, all that was long over by the time I came on the scene. By then, Grandpa had finished his years of private practice, and among his other accomplishments, he had the first woman law partner in the State of Illinois. She was like family to us, and we grew up around Ruth just like she was our aunt, or a grandmother. But the special occasions I really remember were when Grandpa would invite me down to his court during my days off from grammar school.

He was a Referee in Bankruptcy, although now these servants of the court are called judges. Primarily, he heard cases where people had lost all their assets and were filing for reorganization. It may sound dull, but it wasn’t, probably because he also had me sit up on the bench next to him and that was quite a place for a 10 year old kid. Sometimes, the attorneys would object, but that didn’t matter to Grandpa. For the most part, people were very kind to me.

Some of my greatest memories were of the other federal judges. I met Judge Sam Perry, on whose property the Perry Mastodon was found. It made headlines, and his office was lined with pictures of the unearthing of this huge prehistoric animal that was found in his backyard as his family was getting ready to add a pond on their property. And Judge Parsons, the first black judge appointed in the United States to preside over a federal court; and Judge Igoe, a District Court Judge who often invited me into his chambers and then we would head to his courtroom where I got to sit in his chair and “preside” over my own make believe courtroom. These giants of the judicial system were Grandpa’s friends, and I grew up with them. I had no idea at the time how special my childhood was.

Grandpa served from 1960-1966, at which time he stepped down from the bench. I remember asking him why, and he told me that if he accepted another 6 year appointment, he would be 78 years old and he did not think that he could be objective in the handing down of sentences. He told me that he had noticed as he aged, how he struggled more often in trying to understand the magnitude of a “life” sentence. He taught me that a long sentence to a younger man or woman could be life altering, but as a person approaches an older age themselves, they no longer identify with the length of potential sentences, because their own life was passing quickly, and in some cases, ebbing away. So, the older he became, the more he thought that he should step down before he regretted handing out rulings that may, in fact, be unfair to those defendants who appeared before the court.

Never having attained the status of a judge myself, I really can’t speak to any of this directly, but I recall how it weighed on his mind; and so he retired from the bench when I was 13 years old. I remember the parties and celebrations for him in appreciation of a lifetime of service to the judicial community. And I hope that I never forget those memories. When I was born, I was even given my grandfather’s surname as my middle name. So, I became Scott LaRue Toussaint, after Victor E. LaRue.

In celebration of judges everywhere, I thought I would turn to the book of Deuteronomy and review what God entrusted Moses to do. In Deut. 16:18, we are told, “Appoint judges and officials for each of your tribes in every town the LORD your God is giving you, and they shall judge the people fairly.” And I know how diligently my grandfather worked to do just that – judge the people fairly. He was quite an example to me. Of course, there have been a few bad apples on the bench throughout the years – and it seems to be a thankless job, but it is a very biblical mandate.

My encouragement tonight is to let you know that God expects us to obey our leaders and the administration of our judges. And my prayer is that you will conduct your life in such a way as to not need the use of the judicial system to settle your disputes. After all, there is much strife in the world, and we also have a God given mandate to love one another as Christ has loved us. Grace and Peace,

I am not naturally a technology guy. Back in the 1980’s I took the position that if I didn’t worry about technology, it would somehow go away and I would never have to worry about it again. But that was…
Dr. Scott Toussaint 0
Devotional
January 26, 2023

It was on this day in 1998 that Ted Kaczynski, dubbed the Unabomber, pleaded guilty to the federal charges against him, ending more than 17 years of bombings attributed to him. Having attended Harvard at the young age of 16…
Dr. Scott Toussaint 0