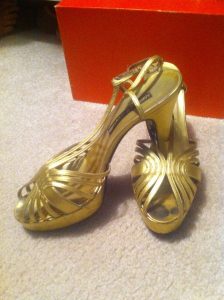 Last Friday night, we headed to Carmel High School to watch the Homecoming football game. As always, attending the game was quite a bit of fun. Many of Kristin’s friends were there, as usual, and so Janet and I started talking about the old days when all the girls were young and played tennis together.

At halftime, the Homecoming court entered the stadium; escorted by their dates and riding in cars donated for the evening. It brought back so many memories of our

girls, Kristin and Jill, when they used to attend their Homecoming dances and proms. Jaime and the other girls, who have known us for years, never realized that I took Kristin and Jill shopping for their prom outfits. They seemed surprised that I did it, instead of Janet.

Anyway, Kristin was there, and so they all started to re-live what it was like in the old days. Admittedly, I did some stupid stuff in those days; and shopping with the girls was one of them. I guess I remembered growing up and not having too much money in our home. It was always a struggle and I recall how hard I worked to get enough money to rent a tux for my own proms and homecoming dances. And I vowed that my kids would never have to worry about that.

Now, it is important to note that I worked quite a bit in those days; I could have been a better father, but I never missed one of the girls’ tennis matches and I always took them shopping for their fancy dresses. Maybe it was a little bit of guilt over some of the things that I didn’t do so well. Kristin and Jill even played doubles together on the Carmel Varsity Tennis team, so they were both pretty good players. And most of their friends played as well. We hosted a number of the events at our home; but when it came time to go shopping, we headed to Ft. Lauderdale during Spring Break and went to Lord and Taylor to shop. After all, they didn’t have L&T in Indianapolis – still don’t. 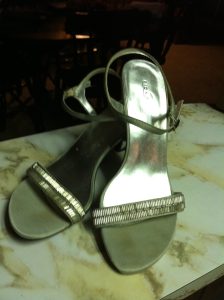 Jill's Prom Shoes - she still has them, also.

It became something of a ritual. Each year, when we were down there, and either of the girls had a prom, we would head out together and shop for a dress; and all the accessories. And I am sure that in remembrance of my own upbringing, and some of the painful memories, I never looked at prices on the dresses they wanted. Now I know what you are thinking; this was stupid, and you are right. It was……

But there was something about being a father, with daughters, that short-circuited whatever brain cells I had, and I loved to take them shopping. I can still see the smiles on their faces as they went through the racks; and then headed down to the first floor shoe department with their new found gowns. By the grace of God, both girls had reasonable taste when it came to not spending a fortune on dresses.

But one year, we couldn’t find any shoes that Kristin liked, so I went to the more expensive section and found a pair that everyone loved. They looked great with the dress. Now I can’t tell you what style they were, or any of the other details, but one thing I remember; they were expensive. Kristin told me they were Anne Klein Couture; and they were more than $300 – back in 1993! I almost choked, but I couldn’t turn back. And they looked great with her navy blue dress. Whoever said that shoes make the outfit really knew what they were talking about.

Jill ended up with a long black dress; and silver shoes that really made the outfit as well. Jill was always a little more conservative than Kristin, and while her shoes weren’t quite as expensive, they weren’t in the discount aisle – I remember that! Kristin enjoyed being a little “over the top” – by the way, she still does.

Now the interesting thing is, 18 years later – that’s right – it’s been 18 years since Kristin bought her shoes, she still has them! I’m not kidding! As she said last Friday, when she’s feeling a little down, she pulls them out, slips them on, and lies on the floor of her closet. Only Kristin could say something like that, and the rest of her friends and family know that she means it! She’s that kind of person. Memories are important to her, as they are to me. Jill feels the same way, but in a more practical way. She’s more oriented to the logical side than Kristin is. And poor Andrew, he didn’t make the post tonight for one good reason – I never bought him shoes and a dress….

The verse for this evening is a short one, from that famous chapter of Ecclesiastes that speaks about a time for everything. It is from Eccl. 3:4, “a time to weep and a time to laugh, a time to mourn and a time to dance.” And while our family has experienced all of the seasons listed above, there is no substitute for the number of times we have laughed and remembered the prom shoes.

The encouragement tonight is to remind you that memories are usually worth the price. I know that I could have been more diligent in shopping with the girls; and I certainly realize that what I did was foolish in the scheme of things. But the joy that has come from memories connected to their teenage shopping sprees has well been worth the price. My prayer is that you will stop and consider the long-term consequences of the decisions you make today. Especially where your immediate family is concerned… and just for the record – knowing what I know today, I would do it all again in a heartbeat. I don’t think there has ever been a better memory of having such a great time with the girls. And it wasn’t about the money – but about the whole experience. As they say in the Mastercard commercial  – priceless….