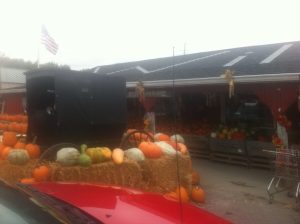 Last week-end, Janet and I ran out for refills on some of our supplies; so we headed out to Wilson’s Farm Market. It is located north of Westfield and from time to time, we head up there to get fresh produce, granola, jams and jellies, fruit and even sometimes, their fudge. There is something so refreshing about going to a farm market rather than heading to the grocery store. Now I know that not everything in the store is from the Wilson farms, but some of the produce is, and I really like the idea of buying local when we can. In fact, some of our readers are really into cooking and buying local, so I have become much more aware of how important it is to support the “home team.”

We had a pleasant surprise when we arrived at the store. There, in all the majesty of fall, were the pumpkins, gourds, apple cider, an Amish buggy and bales of hay. I couldn’t help but remember all the times when I used to hear my family talk about the fall of the year. It is my favorite season. However, this year, I am not quite ready for autumn yet – summer seemed to come and go so quickly that I just haven’t had my fill.

Both sets of my grandparents enjoyed the land. Dad’s parents loved to farm, and I remember when I was a little guy that I used to visit their home in Park Ridge IL. This was long after the farm was gone, but Grandpa still liked to grow vegetables and Grandma used to can everything you can think of. Whenever we were there in the summer, he was out in the garden, and around harvest time, Grandma would be in the kitchen putting up pickles, tomatoes, beans or some other kind of produce from the garden. They even had strawberries and every other kind of berry you can think of.

My Mom’s parents had also loved the farm. Mom used to love to ride horses, so Grandpa bought a 1600 acre farm in Jonesville, MI when she was a little girl. Half of it was given to Grandpa’s sister, and then they were responsible for farming all the acreage and watching over the property. That way, Mom would have a place to ride and the farm could still provide produce and income for Grandpa’s family. It seemed to work out well for everybody. I am told that I have been to the family farm, but it was back when I was a little kid, and I don’t remember it. I guess that I should call up there and see if they would mind if I came to visit. I am curious about the whole set-up. Of course, all my grandparents, and both my parents, are gone now, so we have kind of lost touch with that side of the family, but I have thought about trying to re-kindle things. I think this time of year has that impact on me.

As Janet and I started our own family, we also planted gardens each year. As our homes got larger, so did our gardens, and when we lived in Inverness, IL, we had a garden that was 80′ x 40′, and that didn’t include the rhubarb patch or some of the other fruits and vegetables we grew. We had strawberries, gooseberries, currants, blackberries, raspberries, cucumbers, all kinds of squash, beans, peas, pumpkins (of course) and many other vegetables too numerous to mention. Each fall, Grandma would come out and we would spend many evenings putting up all sorts of things. I even learned to do bread and butter pickles, watermelon rind, plum preserves and frozen rhubarb. I used to love canning stuff.

Eventually, life got busier and I stopped planting gardens. Of course, that led to a decline in canning – it’s just not as much fun when you don’t grow the stuff yourself. This year, I actually thought about having a garden again. I just didn’t think that I have enough margin in my life right now to really enjoy it – perhaps, I will consider it again next year. After all, I am sure our grandchildren would enjoy it, as I did, and there are many worse things to do than to learn to love the land; part of God’s magnificent creation.

Even John, Janet’s dad, has discovered the joys of a garden. His is more oriented toward flowers, shrubs and bushes, but nonetheless, he really enjoys his time in the garden. In fact, this year he has added a section of vegetables and has expanded the flower section. He likes the watering and watching how God is going to supply the next surprise when flowers bloom, or when the majesty of nature marches steadily through the seasons.

My mother’s Dad always said that fall is that time of year that God is preparing to reward the farmers for their hard work during the year; and then it will be a time of rest for the land during the winter, until the entire cycle starts over again. That’s one of the things that I love about the midwest; the change of the seasons and the relentless, dependable cycle of planting and harvest throughout the years.

The verse this evening is from Gen. 8:22, when God issues His promise about the continuation of His plan through all time, “As long as the earth endures, seedtime and harvest, cold and heat, summer and winter, day and night will never cease.” Just think about that for a moment – let it sink in. We can mark God’s promise by the change of the seasons.

My encouragement tonight is to let you know that God is still on the throne and our transition to fall is another affirmation of God’s commitment to us, His people. And my prayer is that you will look anew at nature and realize that it is one of the spiritual pathways that God uses to connect with us. So, as the nights become crisper, and God puts the earth to rest for the winter, I hope you will wait, with great anticipation, for what God has in store after He paints our lives with the colors of fall. Amen…..