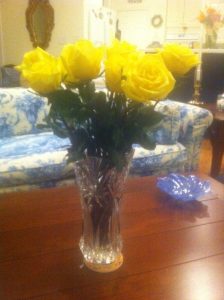 They’re Janet’s favorite color. And yesterday, in anticipation of our 38th anniversary today, I went out on my annual search to find just the right bouquet for her. And, I had success, just like the past 37 trips to the florist throughout the years for this most important occasion.

We had a quiet day today, and dinner this evening; and we had a chance to reflect on the past quite a bit. The kids are grown, and all on their own, and so it is just Janet and me, the way it started out so many years ago. And that’s just fine by us. Of course, we love all our children, but they have their own lives to lead; and let’s face it, Janet and I have dedicated our lives to one another, and that’s forever. So, regardless of what is happening in the rest of the world, Janet is my one constant, and I am hers.

For the past several days, I have been thinking not only of our wedding, but the day before as well. After our rehearsal on Thursday evening, August 23, 1973, we celebrated at one of my favorite restaurants on the south side of Chicago – an obscure place called The Barn. Jason and Russell were the maitre’d’s and the entrance to the place had a large copper and brass front door at the end of a long red carpet – you had to be buzzed in. It was the kind of place that you would expect to find in Lexington or Louisville, because the walls were filled with ribbons and trophies and all things horse related. I didn’t get there very often; in fact, other than for our rehearsal dinner, we only went there once a year – to celebrate my birthday with the family. According to Dad, that was about all he could afford to do. Each year, the drill was the same – and so it was natural to want the rehearsal dinner there.

The Barn had the best shrimp cocktails ever, with a terrific garnish tray of sweet pickles, chilled carrot sticks, green onions and olives (we never ate the onions). I think it was there that I learned to love sweet baby gherkins. Then French Onion soup… and for the main course, filet mignon. Finally, for dessert, the best ice cream sundae you have ever had – with whipped cream and a cherry on top. I never even looked at another choice for dinner. And so that was our meal for the rehearsal. Just couldn’t beat it. It never occurred to me until just now that the last dinner I had as a single guy was at that restaurant.

On August 24th, our actual wedding day, we were married at Trinity United Methodist Church on the corner of 99th and Winchester, in Chicago. Rev. Stephen Liddicoat, a former minister we both felt close to, had moved on to another assignment, but Rev. Ross Sweeney, his replacement, invited our former pastor back to conduct our ceremony. That meant a great deal to both of us. It was so natural to be married in the church where we had each attended for our entire lives – we grew up in that sanctuary, and it was a beautiful one – Gothic architecture and huge beams along the ceiling. It is still one of the most beautiful churches I have ever seen.

We both remember being in the choir and all the services we had attended, as well as the annual Christmas pageants and other special occasions we celebrated at Trinity. Secretly, I used to dream about what it would be like to ever preach in a church like that, but if you ever would have told either of us that we would have the kind of God centered lives we do now, we would have laughed. And to be perfectly honest, ministry is truly a “team” sport and if Janet had not supported all the decisions we eventually made, I would never have attended seminary. It would not have been fair to her. And now, I have had the honor to do exactly what I dreamed about – preach the Good News from the pulpit – although it took a long time to get there!

But it all hasn’t been a bed of yellow roses – we have had our tough years, just like every married couple. However, we are absolutely committed that our marriage is an eternal thing. Now there is some debate in the Bible as to whether people are married in heaven, but we’ll have to wait and see on that one. I do remember that the one phrase that we both wanted deleted from our wedding ceremony was the phrase, “till death do us part” at the end of our vows.

Our reception at Beverly Country Club was one to remember. My family couldn’t afford to belong to a club, but Janet’s parents did, and it was quite the affair. I still remember it clearly – and it was even more memorable than the rehearsal dinner. And I couldn’t ask for better in-laws. I have known John and Nancy longer than my own parents. So, God had a plan, and it all worked out. I am a lucky guy, and now that the rough edges have been knocked off, I am much easier to get along with than I used to be – at least that’s what Janet says. 😉

The verse for tonight comes from Psalm 139:16, one of my favorites and a psalm that I use at many of the weddings I now conduct. It says, “your eyes saw my unformed body. All the days ordained for me were written in your book before one of them came to be.” When I look back on all the years we have been together, only God knew what was in store for us; and it has been quite a wonderful experience. I would do it all again in an instant; and so would Janet. But neither of us would ever have dared to imagine how great our lives have been together. I wish that for every married couple – even the tough times; because it strengthens marriages when you come through the fire together.

My encouragement tonight, especially for the younger couples out there, is that marriage is one of God’s greatest desires for His people. After all, it was His idea. And it takes work and dedication; or it can die of neglect. And for those of you who desire to be married, or have lost a loved one, I pray that God will grant you peace and that someday you will find the perfect partner that God has in store for you. So, whether you end up like Janet’s grandparents, Stew and Fran, who were married more than 76 years, or Janet’s own parents, who have now been married 64 years, or like my parents, who only made it to 30 years before my Dad died, I wish you a healthy, happy, God-centered life as Janet and I celebrate the anniversary of the day that God joined us together. Grace and Peace, from both of us….