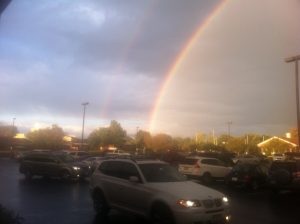 Last Friday evening, I returned to Carmel from an afternoon on the south side of Indy, and on the way back, I stopped to pick up dinner for the family – including Carter and Cooper, two of our grandchildren. Throughout the beautiful fall day, there were indications that a weather front was moving in and the sky started to turn dark before I ever headed north. By the time I got in the car to come home, the sky was dark gray and the rain had started to fall – only a drizzle at first, but by the time I was back in Carmel, the rain was coming downs in torrents.

Anyway, as I was pulling into the parking lot to pick up our meal, everybody had cleared out of the restaurant and was on the sidewalk taking pictures of the sky. When I parked the car and looked up, I could see why. There were TWO rainbows in the eastern sky; not just one, but two – and they were complete rainbows – full arcs and they seemed so close that you could reach out and touch them.

I took by phone camera out snapped a few pictures myself. One of the rainbows was so bright, I know that I have never seen anything like it. And then the second rainbow, fainter, but still visible, actually in front of the first one.

I was immediately reminded of God’s promise to Noah after the waters of the Flood had receded, in Genesis. After the ark had come to rest on the side of Mount Ararat, Noah and his family built an alter and offered a sacrifice to God. I am sure that Noah was concerned about what had just happened; and God entered into what we refer to as the Noahic Covenant. It was what we think of as a unilateral covenant. That means that God made a promise that did not require Noah or his family to promise anything in return.

In summary, once the alter was built, and the sacrifice offered, God indicated that He had established His rainbow in the sky as a sign of the covenant that God would never destroy the earth again with water. Then God said something pretty interesting. He said, in Genesis 9:16, “Whenever the rainbow appears in the clouds, I will see it and remember the everlasting covenant between God and all living creatures of every kind on the earth.”

Now this brings up an interesting theological argument. After all, God didn’t say that Noah would remember the covenant – He said that He Himself would remember the covenant. And that verse has raised quite a few theological eyebrows. After all, does God need a reminder of His promise to Noah? Is God going to forget what He promised to Noah about never destroying the earth again with water? That’s kind of a scary thought. After all, He is God. He is perfect, and that means He shouldn’t forget anything. Right? And if He does forget, does that mean we run the risk of being destroyed by another flood – again?

Well, the answer is really quite simple. God is perfect, and He hasn’t, and won’t, forget us. And God doesn’t need a rainbow to remind Him of His promise to us. No more than any of us need a wedding ring to remind us that we are married. But biblically speaking, each of God’s covenants had a “sign” of the covenant; and in this case, God chose the rainbow.

To us, the rainbow should be a reminder that God in heaven is looking down on us, and reinforcing His relationship with us each time we see His rainbow – part of His incredible creation. And His words give us assurance that each time we look up in the sky and witness the awesome beauty of a rainbow, God is on the other side, enjoying the same sight as we are. And that I find reassuring…..

That God and I are connecting through a part of creation is something that I can understand. And it is said that every moment, somewhere on the earth, a rainbow exists. So we know that moment to moment, every second of every day, God is remembering His people and connecting with them somewhere on the face of this planet. And that’s just plain awesome!

And one other thing about rainbows in the Scripture. They are only mentioned three times, and each time it has to do with a storm. One time, we read about rainbows before a storm, once during a storm and in the case of Noah, after a storm. So when we have storms in our own lives, we can rest in knowing that God is there with us – through everything.

The verse for tonight is Gen. 9:12, “I have set my rainbow in the clouds, and it will be the sign of the covenant between me and the earth.” So, no, rainbows don’t have anything to do with leprechauns or pots of gold; they’re far more important than that! So I hope that tonight you have a greater appreciation of what happens each time you see those familiar colors in the sky. Because God is watching you – and connecting with you through His creation.

My encouragement is to let you know that God desires a personal relationship with you – even through His rainbows. And my prayer is that you will reach out to God and deepen your relationship with Him in every way you can. Because He is all around you, and me, and present in every blade of grass; and every rainbow……

Are You a Christian?

One of the questions that I get asked from time to time is what is the requirement to be considered a "Christian." It turns out that if you ask most people why they think that they are going to heaven,…
Dr. Scott Toussaint 0
Lost in Translation
January 5, 2023

Lord, I Love You!

Several days ago, on the morning of December 31, 2022, Pope Emeritus Benedict XVI passed into the arms of Jesus. The Vatican has been strangely quiet on the exact nature of his final illness, but it is known that Pope…
Dr. Scott Toussaint 0
Lost in Translation
December 1, 2022

The Liturgical Season of Advent…

We recently started the season of Advent - last Sunday, in fact. The season of Advent is the beginning of the new liturgical year - the time that we celebrate the upcoming birth of Jesus and His entrance into the…
Dr. Scott Toussaint 0